Bee stings and stinger removal: have we been doing it right?

The arrival of summer weather usually brings an increased exposure to the outdoors, and one common hazard of outdoor activity is a bee sting. In this post we’ll take a look at the generally accepted recommendations for removal, and what a new study has indicated about possible revisions.

Bees typically sting in defense, either of themselves or of the hive. When foraging away from the hive, bees will rarely sting unless swatted at, handled roughly, or otherwise bodily threatened. The best way to avoid being stung by a bee is to just leave it alone, however our sudden reactions to bees often result in increased likelihood of being stung. There are also several factors which may influence bees to sting a person: 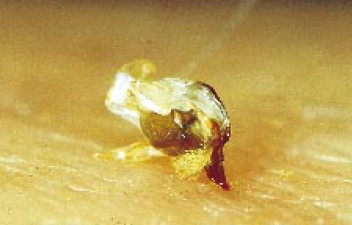 Bees are able to extend and retract their stingers. When stinging another bee, the stinger can usually be withdrawn, but when stinging an animal with thick skin (such as a human), the stinger of a honey bee is usually left behind, as the physical structure of the sting lodges it into the tissue. Bee stingers are actually made of two “lancets” with back-curved barbs on the ends; reflexive movement of the attached muscles move these lancets in an alternate motion, driving them deeper into the skin as the barbs catch (and more venom is delivered). This is why the stinger and venom sac are usually left behind. Bumble bees, hornets, yellow jackets, and wasps are able to sting multiple times, since their stingers are smooth and can be easily withdrawn from the victim's skin. 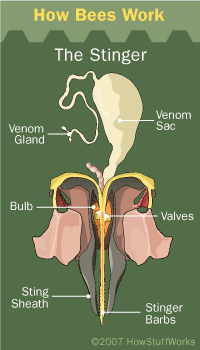 use of a credit card or other dull edge to scrape the stinger out of the skin. This theoretically results in less venom being squeezed through the stinger and into the victim, as would seem to occur if thumb and fingers or tweezers (or other blunt instrument) were being used. However, a 1996 study published in The Lancet found that “the method of removal does not seem to affect the quantity of venom received. This finding contrasts sharply with conventional advice on the immediate treatment of bee stings. Probably this advice derives from a misunderstanding of the structure and operation of honey bee stings. The sting continues to inject venom, but it is the valve system, not contraction or external compression of the venom sac (as might occur from pinching with finger and thumb) that pumps the venom.”1 This study measured weal size in comparison to the delay in sting removal, and found that even a short delay resulted in higher volume of venom being injected. Those victims of a sting who spend time looking for an appropriate tool, rather than immediately attempting manual removal of the sting, would therefore receive a larger injection.

Minor, localized allergic reactions can include swelling, itching, pain, and raised skin (a “weal”) around the location of the sting. These symptoms can persist for several days. Persons experiencing these symptoms are encouraged to see a medical professional, even if they seem to be minor in severity. General treatments for minor reactions include applying ice to control swelling, calamine for itching, and ibuprofen or acetaminophen for pain. There is also some anecdotal evidence that applying damp baking soda and/or unseasoned meat tenderizer to the sting also helps to alleviate pain and itching.

Bee and other insect stings are a common cause of anaphylaxis (a whole-body allergic reaction). If someone has a serious reaction to a bee sting, their doctor will often send them to an allergy specialist for immunotherapy. Allergy shots are generally given on a regular basis for a few years and can reduce or eliminate an allergic response. Signs of a severe allergic reaction can include:

If a victim of bee sting shows any signs of anaphylaxis, don't wait to see whether the symptoms improve. Seek emergency treatment right away by calling 911. Severe cases of untreated anaphylaxis can result in death in under 30 minutes. Antihistamines such as Benadryl and Claritin aren't sufficient to treat anaphylaxis. These medications can help treat minor allergic symptoms, but not rapidly enough for severe reactions. Epinephrine, if prescribed for the victim by a doctor, should be administered immediately and the victim monitored until emergency medical services arrive. For more information on using epinephrine, see our previous blog post “Severe Allergic reactions: How to know when to call for help”.