Treating snake bite victims - what not to do, and why not to do it.

Getting bitten by a snake is shocking enough – don’t make it any worse.

As we teach more and more First Aid classes at CPR Seattle, our instructors get to hear about many misconceptions related to the emergencies we discuss in class. Even with the extensive information available online, some of these misconceptions are often cited and repeated by various sources. We try to clear up these errors whenever possible.

One section of the American Heart Association First Aid course deals with what we term “Environmental Emergencies”. These include treating exposure to heat and cold, addressing insect bites and stings, and injuries from other types of animals, including snakes.

There are a few treatments for snakebite that are occasionally brought up in class that are definitively not recommended for effective treatment. Usually preceded by the words “I heard somewhere that…”, these treatments are ineffectual at best, and at the worst, seriously hazardous. These include:

We'll llok at these in detail, and then go over the right ways to address this type of emergency.

The use of electrical shock to treat a snakebite victim is a practice that even today persists in various places, especially in some online “resources”. The theory appears to be that by applying a powerful shock to the victim, that it somehow affects the venom in such a way that it becomes no longer harmful. Various delivery methods mentioned include car batteries, modified electrical equipment, and even Tasers.

Where did this theory originate, and why does it seem to persist? To answer the first question, the practice of treating snakebite with electricity seems to have been in use at the turn of the century1, but had a resurgence in interest after a letter (not peer-reviewed article) was published in 1986 in the Lancet journal by a doctor who claimed to be successfully treating venomous snakebites with electric shock therapy. Picked up by Time magazine, the New York Times, and most notably Outdoor Life, the treatment became more widely noted. Apparently the doctor was basing his theory off of anecdotal information from an Illinois farmer, who made the local paper by claiming that his severe reaction to bee stings was alleviated by the application of a “high voltage, low amperage, direct current shock to the site of his bee stings prevented his usual severe reactions”, however, the doctor did not cite when and where the article was published. For more on this story, see “Does electric shock treatment work for snake bites? Actually, funny story...” and A Review of Electric Shock Treatment for Snakebites (Just Say NO...)

Tourniquets for snakebite are also not recommended, although their use may stem from misinterpreting the common practice of employing compression to the bitten limb via a bandage. As illustrated very well by the Queensland Health website (they definitely know their venomous snakes – Australia has roughly 13 gazillion venomous species), compression and immobilization will “retard the movement of venom from the bite site into the circulation, thus ‘buying time’ for the patient to reach medical care.” The effect of applying a tourniquet will be to concentrate the venom in one area, increasing tissue damage and necrosis (tissue death). In addition, swelling of the area may decrease circulation, making it harder for antivenin to get to the affected area. The idea is to slow the spread of venom by slowing lymphatic flow, but not to stop it entirely. For more on tourniquet use, see our previous blog post – “Tourniquets: Should you use one in an emergency?”

Just….just don’t. Cutting increases the risk of infection, and applying suction to remove venom does no such thing. Analysis of extracted blood indicates little to no venom can be removed in this manner (see Suction for venomous snakebite: a study of "mock venom" extraction in a human model), and mechanical extraction devices can actually damage the tissues around the injury, which can trap venom. Even worse would be to try and remove the venom by mouth.

Really? Welcome back to the 19th century. Cauterization, when cited by ancient sources, usually followed the aforementioned cutting-and-suction method. Apparently it was felt that once the venom was removed via severe bleeding (which we know didn’t work) then burning the tissue would destroying any remaining toxin (which we know REALLY didn’t work).  At this point, the victim may as well just shoot their finger off, right? 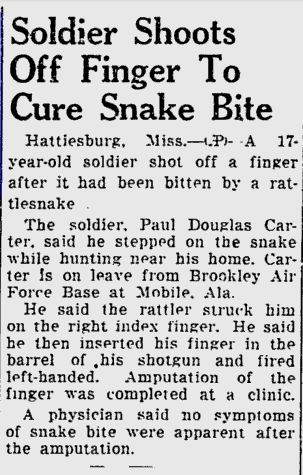 Ok, so this might not be a problem – one recommendation is to wash the bite with soap and water to disinfect it; applying alcohol topically might achieve the same purpose. One thing that should definitely not be done with alcohol is to have the victim drink it – and that goes for caffeinated drinks as well. These could speed the victim’s body absorbing the venom by increasing the circulation rate.

An interesting side note is that the November 1918 issue of Outdoor Life printed a letter from a reader who wrote that “The simple remedy of fire application is more effective than all the ammonia or whisky that ever came from a drug store or saloon”2. Good to see that the readers always kept up with the latest science.

What’s the right thing to do?

Now that we’ve seen what not to do, let’s review the current American Heart Association First Aid recommendations for treating snakebite:

The odds of dying from a snakebite in the United States are very low. Out of approximately 45,000 snakebites per year, only 5 or 6 deaths occur. Many of the snake bites are caused by intentionally handling the snake. Statistics show that most victims are male, between 20 and 40, and that the bite occurs after reckless behavior attributed to the consumption of alcohol. In other words, it’s not the snake’s fault.

Also, if you plan on spending time outdoors in unfamiliar areas, especially those without close medical aid, we recommend familiarizing yourself with the local species to find out which may be venomous, and how to prevent contact. A little knowledge can go a long way.