Many studies have been done on the effects of bystander CPR on victims of cardiac arrest. But what about the effects on the bystanders performing CPR? A study by the Wilson Centre in Toronto, Ontario1 was conducted that offers some insight as to what transpires at the scene on the part of the rescuers, both physically and emotionally.

Six bystanders who were referred to the program by paramedics shared their recollections and experiences with the research team, who distilled the findings into common themes that were shared by multiple rescuers. All the studied cases involved bystanders who responded to incidents in the workplace, had previous training in CPR, and who had never performed CPR before the incidents in questions.

Three main topics arose from the interviews that were listed by the authors: Being Called to Act, Taking Action, and Making Sense of the Experience.

Being Called to Act 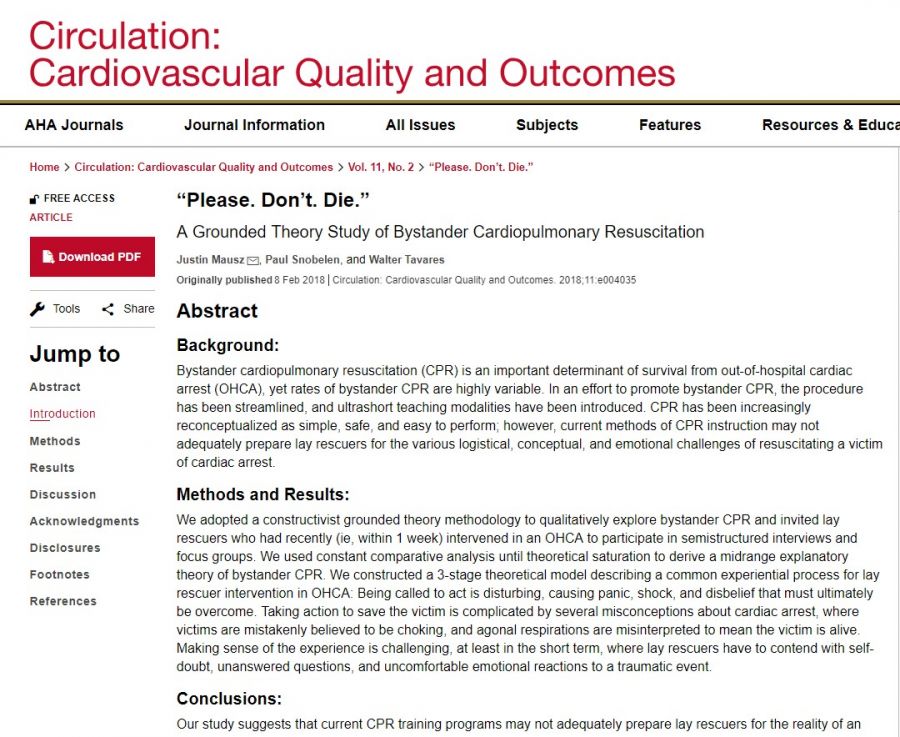 respirations.” Specific comments were made on the extensive color changes apparent on the victims’ faces. Quotes from the subjects include:

As we often indicate, knowing how to perform CPR is one thing, doing it is quite another. Subjects commented that fears of liability or workplace discipline kept them from performing CPR, as in one person whose certification had expired and therefore assumed that he could not give aid. One person indicated that they were required to call an off-duty member of their workplace response team at home to notify them that a person at work needed aid. Among the issues that arose:

Making Sense of the Experience

As expected, the experience was emotionally problematic for the rescuers, and they commented on the post-event confusion and doubts that they experienced. There were several types of psychological symptoms that presented – difficulty concentrating, sleeping problems, flashbacks triggered by certain circumstances and increased social avoidance. While several of the victims of cardiac arrest in these situations achieved ROSC (Return of Spontaneous Circulation), none regained consciousness on the scene. Half of the victims died at the hospital, which led more speculation by rescuers: “When I heard word [that] he passed, that was hard, because I, and I found out that night, so I thought ‘Is it because of me?’ Is it because I didn’t run fast enough? Was I supposed to start the process?”

After the incident, while some participants indicated ongoing difficulty processing the experience, some reported a positive change in their feelings of readiness in dealing with future incidents.  “It’s like everything around you has just changed. It’s not just a workplace anymore, you kind of feel like you have a bigger responsibility here.”

How CPR training can help the situation

CPR training classes at CPR Seattle are meant to be fun and engaging.  However, in the sense of overall CPR Training, whether via the American Heart Association, American Red Cross, or any agency, the study identified several factors that need to be addressed to better prepare students for the realities of sudden cardiac arrest:

The takeaway from the report? Having to perform CPR is potentially traumatic, may involve gaps or errors in knowledge and technique, and result in short or long-term psychological problems for the bystanders called upon to respond. Going forward, attention will need to be paid to training methodology and aftercare requirements in order to minimize the impact on everyone involved.