You have probably noticed Google's autocomplete feature that suggests search terms as you type. In this blog post, we're taking the top 5 questions that autocomplete suggests when typing in "Does CPR...".

Well - yes, it does. Every time. But what qualifies as "working" for CPR? Most people who ask this question most likely mean "Does CPR bring a person back to life?", or in this case, restore a person's circulation. The answer to that particular question is "sometimes". The term ROSC stands for Return Of Spontaneous Circulation, which means that a cardiac arrest victim's heart is now beating normally on its own. This can and does happen during CPR, but not always. But that doesn't mean the CPR isn't working. The goal for a bystander providing CPR is not specifically to achieve ROSC - that's likely to require advanced medical intervention, such as provided by a paramedic team or at a hospital. The goal of CPR, particularly as it pertains to non-medical professionals, is to maintain circulation of the bloodstream until advanced personnel arrive to take over. Keeping the blood circulating at a sufficient rate will bring oxygen to the body's tissues. Our main concern in this case is the brain tissue. If tisues are deprived of oxygen for too long, they begin to die. If a victim of cardiac arrest suffers too much brain damage, that will greatly decrease their chances of survival - even if ROSC is achieved at some later  point. By providing CPR quickly and effectively, a CPR provider will help to prevent this brain damage and give the victim a better chance. 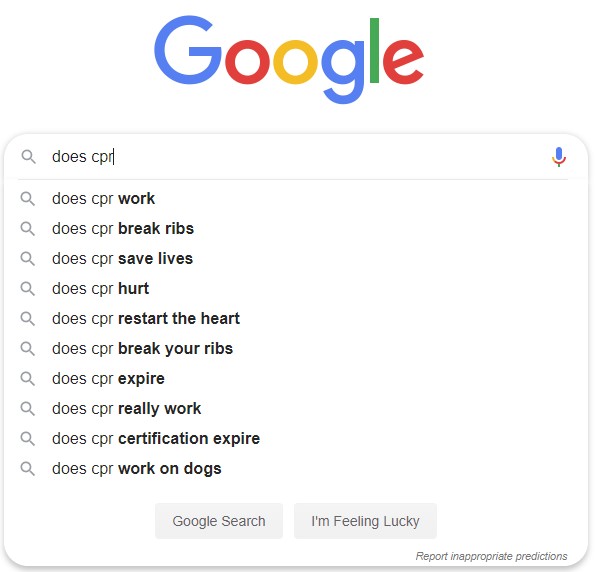 Yes, it does. Fairly often. If you're doing it correctly. One requirement for successful CPR is that the adult victim's chest is compressed to a depth of at least two inches, with full recoil between each compression. This is required for adequate circulation, as mentioned above. The ribs will bend and move during these compressions, sometimes causing a popping or cracking sound as the bone separates from cartilage. The ribs or sternum can fracture as well, especially in those victims whose bones may be more brittle than average. A study published in 20181 indicated that out of 52 cases, 40 of the victims sustained one or more fractured ribs. Sternum fracture occurred in 20 of the 52 cases. The good news? It doesn't matter. Without CPR, victims of cardiac arrest have a 0% chance of survival. Rib and sternum fractures are not going to be fatal. Bones can heal. Cardiac arrest cannot - at least not without the help of CPR.

Yes, Definitely. But survival rates vary widely from location to location. The likelihood of surviving cardiac arrest depends on several factors. The American Heart Association defines these factors as the "Chain of Survival". When addressing out-of-hospital cardiac arrest, the chains in this link include:

2016 statistics compiled by the American Heart Association2 list the survival rate for out-of-hospital cardiac arrest for that year was 12%. About 350,000 cases were looked at. Out of those, about 46% of the victims recieved bystander CPR.

By comparison, the 2017 statistics for King County, Washington show that 70% of all victims recieved bystander CPR, and 56% of those with a witnessed collapse survived. This also happens to be the county that has long had the highest out-of-hospital cardiac arrest survival rates in the world.

By this we assume the question pertains to the victim, not the rescuer. The answer is yes - but only afterwards. Remember, when you're giving CPR to a person, it's because they are unconscious and not breathing. They can't feel anything at this point. Now, will they be in some pain afterwards? Maybe - if they're alive. And we're pretty sure that if you polled 100 survivors of cardiac arrest, all of them would much rather be in pain than not have lived. So don't let the fear of injuring a victim prevent you from giving CPR. No matter what injuries a person may have suffered, if they don't have circulation, all you need to worry about is giving CPR. Injury is always better than death.

#5: Does CPR restart the heart?

No. CPR does not restart a heart that has no more electrical activity. However, CPR and the use of an AED can in a way reset the heartbeat and restore a normal heart rhythm. Cardiac arrest victims (at least initially) are often in a state called ventricular fibrillation, or VF. VF occurs when a heart is experiencing irregular, erratic rhythms that no longer circulate blood. CPR can provide the pumping action necessary for circulation, and an AED can eliminate the irregular heart rhythm by providing a shock that essentially cancels out the chaotic electrical activity. See our previous post "How an AED Works" for more details. Using an AED during CPR will greatly increase the victim's chances of survival. For those in the Greater Seattle metropolitan area, check out our AED Location map to see where AEDs might be located near you.